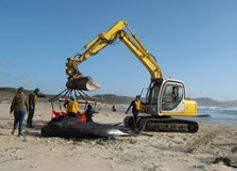 Whale rescuers are attempting to move all of the remaining whales to the Spirits Bay stream for another night, with the hope of a re-float tomorrow

It’s slow and arduous work for whale rescuers at Spirits Bay near Cape Reinga for the 160 volunteers and DOC staff have flocked to the Far North beach from as far away as Tauranga.

As of 6pm south west winds were averaging 46km/h and gusting to 67km/h in the area says WeatherWatch.co.nz.

A pod of over sixty whales were beached yesterday at the Far North beach – about 40 have died and the fate of the remaining 24 whales stranded depends on the weather.

DOC spokeswoman Sioux Campbell says the whales have been spread along the beach in three groups, and the focus now is on moving the whales to the stream at Spirits Bay.

The Department of Conservation says the plan is to keep them in the stream overnight and move them 50 kilometres by truck to Rarawa Beach for refloatation tomorrow.