Home > News > Westerlies crank up ahead of polar south...

Westerlies crank up ahead of polar southerlies 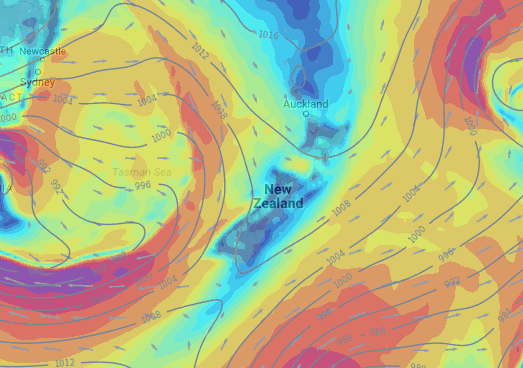 As of midday, in one of the very coldest weeks of the year, some parts of the North Island are over 20 degrees, several degrees above average for late July.  Why? Westerlies from Australia.

The westerly flow is today kicking back in – and a high north of New Zealand is also helping dredge up some sub-tropical air into the mix too.  While it’s still cold in some areas, the warmer trend is fairly typical ahead of a big windy, wet blast – and also ahead of a polar blast, which is scheduled for this weekend and early next week.

WeatherWatch.co.nz says parts of Hawkes Bay are now on 22 degrees while Northland and Auckland is getting up into the late teens (when it’s not cloudy).

It’s not just the North Island – Canterbury is also pushing into the late teens with unofficial recordings of 20 degrees here and there thanks to the windy nor’westers.

The air flow today over New Zealand is coming out of regions typically warmer than we are – like the sub-tropics, Queensland, New South Wales, Canberra and through Australia’s interior.

The polar snap coming in this week is a messy one – for the most part it’s not a direct big blast from the ice shelf to New Zealand, but at times it could be – a few lows and highs in the Southern Ocean may alter the flow a bit, which is why it’s a little harder to lock in more details.

The incoming southerly – which arrives in Southland on Saturday and the North Island on Sunday and Monday – will bring snow to both islands and to low levels, possibly even sea level for a time in Southland and Otago – but snow fall amounts do not look huge at this early stage.

It’s a messy forecast, and New Zealand is often borderline with sea level snow due to being two small islands surrounded by sea – but any southerly from Antarctica in mid-winter brings the risk of sea level snow.  Moisture levels for snow do not look especially high at this stage – but we’ll keep you posted, with more detailed updates as we head in to the weekend.

The incoming cold snap will be short lived – in fact by next Wednesday (one week from today) we may have polar southerlies blowing up the east coast while sub-tropical northerlies blow down the west coast.  New Zealand’s “sprinter” season (spring+winter) seems to be continuing.

– Image / Next Wedneday’s wind map shows Polar southerlies just to the east of New Zealand while at the same time Sub-tropical northerlies will be spreading down the western side.