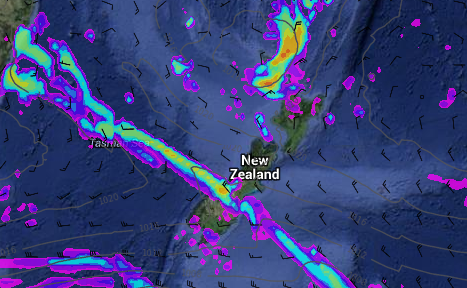 The weekend may be kicking off with high pressure and light winds on Saturday – but Sunday is quite a different story with a small low to the north of New Zealand feeding sub-tropical downpours into northern regions and a cold front moving up the South Island.

Even though the bulk of the northern North Island rain will be out to sea, it is skirting the most populated regions of the country on Sunday and rain does look likely, for a time, on Sunday as it tracks along our north eastern coastline.

Saturday:
North Island: Dry or mostly dry. Only a coastal shower risk here and there mainly in the north.  Rain is possible in the Far North later in the day – and overnight this may start to drift south over Northland.

Sunday:
North Island:  A small low will slide over the upper North Island, fed by moist sub-tropical air.  This means heavy downpours are possible in Northland, parts of Auckland, Coromandel Peninsula, Bay of Plenty and East Cape for a time on Sunday. Remember the bulk of the rain is offshore out at sea, so there will be a very fine line over land between rain and dry – keep an eye on our rain maps to get a better idea.  The northern rain band is sliding SE across the day – Taupo, other parts of Waikato, and northern Hawkes Bay may receive rain or showers later in the day or at night.

Dry for the southern half of the North Island.

South Island: A narrow band of rain slowly tracks up the West Coast – dry either side of it.  By the end of the day this front will likely crumble into showers around Greymouth.  Further south and this same front will bring showers into Otago in the morning and then into Canterbury during the day, with the front weakening into the afternoon. Late showers may return to Southland.

Dry or mostly dry for the rest of the South Island.