Weekend Low – the latest on the wind, rain & sun 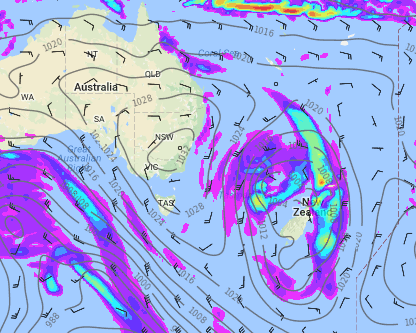 A large low is going to develop and deepen from Friday and across the weekend as it tracks from the southern Tasman Sea across New Zealand and out into the Pacific Ocean.

Thursday will be another calm day in most places with frosty and foggy patches – fog more likely in the North Island.

As we head into Friday two things happen – a northerly quarter flow will form over the South Island and lower North Island but the rest of the North Island goes into a calmer spell, with fog patches possible.

Across Friday heavy rain moves into the West Coast of the South Island and NE winds pick up – these may turn more NW inland and rise to gale for a time, but should be below damaging.

By Saturday the centre of this large low will be drifting across much of the South Island bringing calm conditions and mainly dry weather to a number of regions too. Heavy rain falls across northern New Zealand, mostly north of Lake Taupo and may be slow moving due to a blocking high to the east. Gusty northerly quarter winds will affect the North Island on Saturday but, along with the rain, should ease back later in the day.

Sunday is a messy day forecast-wise around New Zealand with the centre of the low bringing calm weather to large areas but also a total mixture of wind directions, showers, cloud and dry areas. It’s a messy set up that will likely need another couple more days to fine tune.

A southerly change also arrives in Southland and Otago on Sunday with heavy snow possible on the ranges for a time, but snow is not forecast lower down. However there may be some chance of snow on the alpine highways so worthy of mentioning and monitoring. This southerly is only a localised one – and is not a major polar blast.

Finally by Monday the low is tracking east of the country and a general southerly flow is spreading over New Zealand – Christchurch and Wellington look showery and cold on Monday but most other places will see an improvement.

There may be some large sunny spells due to our mountains and ranges blocking the clouds this weekend – with the West Coast looking especially spectacular on Monday thanks to the southerly flow.