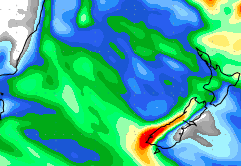 There’s good news for waterlogged New Zealand – high pressure is rolling in across the country with sunny skies in many regions too.

A few showers are clipping the lower North Island, mostly in South Wairarapa and a few around Mahia Peninsula and Gisborne area. Most of the North Island showers are already moving out to sea.

It’s dry in the South Island but a few showers are clipping Banks Peninsula.

On Sunday and Monday high pressure dominates the entire North Island helping dry farms out further and back lawns.

However heavy rain returns to the West Coast on Monday.

Next Week remains unclear. We’re quite certain a low pressure system – or two – will be forming around and near New Zealand, but it’s unclear the exact depth and tracking of these potential lows.

Next week is a battle of high pressure against low, depending on which system dominates will be the deciding factor on whether or not New Zealand gets any heavy rain warnings next week. The set up makes it quite possible, but some models which we also trust are showing the worst of the weather may be out at sea with high pressure affecting the outcome. It’s one of those ‘one to watch’ set ups and we think by Monday we’ll have a good idea if more heavy rain is coming – or if it’s just the normal burst of rain or showers.

At this stage long term rainfall maps suggest the western coastline of New Zealand (especially the West Coast) will be most exposed to more rain over the next 10 days while eastern areas may be in for a generally drier pattern.

For now – enjoy the incoming high pressure system this weekend and into Monday for most!