Week ahead typical of spring 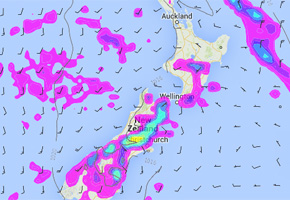 Most of this coming week is looking unsettled but at least it should be a little tamer overall compared to the current system that is moving over us today and tomorrow. By the time Friday comes around an anticyclone starts to bring in settled weather for most of the country.

So on Monday we have a strong westerly airflow over the country, a front moves over the North Island in the morning then clears away during the afternoon off to the northeast. So many can expect rain or showers at first with northerlies then clearing up after midday with a westerly change. In the South Island expect rain or showers in the west, showers spread north along the east coast during the day with a southwest change otherwise mostly sunny before hand with gusty northwesterlies.

Tuesday sees winds back off a fair amount with a gentle south to southwesterly airflow over New Zealand. Cloudy spells increase for the west of the North Island with light west to southwest winds, a few light showers for most by afternoon. Mostly sunny on the east coast although cloud builds there too in the afternoon with drizzle by evening.

Cloudy spells for a fair amount of the South Island, the odd shower about or drizzle patch. In the afternoon and evening showers could get heavy for inland areas with hail anywhere from North Otago up to Marlborough, mainly about and east of the main divide. The West Coast sees sunny spells and light winds although there could be those showers pop up about the ranges in the afternoon and for a good portion of Buller too.

Wednesday sees a mostly sunny day for the West Coast of the South Island with light winds, afternoon showers about the ranges possible however. Along the east coast expect cloudy spells and the odd shower once again especially afternoon / evening for inland areas North Otago northwards. A low pressure system deepens east of Marlborough during the day and this may bring some heavy rain to the region from afternoon then easing later.

Sunny spells for the North Island with southwesterlies, the odd shower mainly afternoon onwards, rain about Wellington may become heavy for a time later in the day. WSW winds along the east coast, a few showers about Wairarapa spread northwards in the afternoon and evening.

Periods of cloud for much of the North Island on Thursday, southwesterly winds. The odd shower in the west with some rain south of Taranaki through to Kapiti, drier and sunnier skies for northeastern parts of the island i.e. Gisborne and the Bay Of Plenty although isolated showers are possible there too from late afternoon especially inland about hills and ranges.

Sunny spells for the South Island on Thursday, winds mostly light as a ridge of high pressure starts to move over. There may be enough instability to create a few afternoon showers once again mainly inland about the ranges, Marlborough has the best chance. Finally on Friday an anticyclone starts to move over coming in from the Tasman Sea, most places are looking good with sunny conditions and light winds. Perhaps Wellington and the Wairarapa may see a few clearing morning showers then afternoon sunny spells increasing.