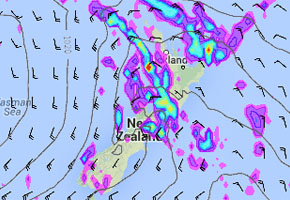 A cold southwesterly front moves over the South Island this evening and lies over the lower North Island by dawn tomorrow morning,

Auckland & Northland
Mostly cloudy with showers about Northland easing overnight. Mainly dry for Auckland with only the risk of a shower now and then although there is a greater chance for showers this evening for a time. Northwest breezes.
Lows tonight: 10-11

Canterbury
Rain moving through South Canterbury pushes into North Canterbury later this evening with a southwest change. Beforehand expect some high cloud. Snow lowers to 400m overnight then 300m by dawn. Snow flurries to 300m will only be minimal.
Lows tonight: 2-3

Central Otago
Rain, easing to the odd shower this evening then clearing overnight, some snow lowers to 300m for a time then clearing. Cold south to southwest winds.
Lows tonight: -1-1