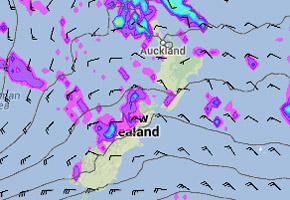 A westerly airflow lies over the country tonight, plenty of cloud over the North Island while the South Island remains mainly clear in the east and cloud with showers out west.

Coastal Otago
Chance of a shower this evening with a gusty westerly change then expect mainly clear spells overnight. There is the chance of a shower continuing at times about the Catlins.
Low tonight: 5

Central Otago
A few showers move through this evening with westerly winds then clear around midnight.
Low tonight: 2