Home > News > Wednesday and Thursday on track for grad...

Wednesday and Thursday on track for gradually more settled weather 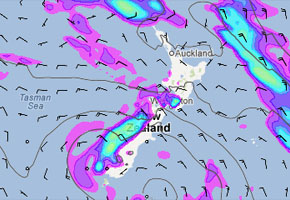 Wednesday and Thursday have a more settled look to them weatherwise however by the weekend a low pressure system moves quickly towards New Zealand bringing deteriorating conditions. For now though, we’ll have a little bit of calm before this incoming storm.

WeatherWatch.co.nz forecasters say that in the east from about Ashubrton right up to Gisborne mostly sunny weather can be expected Wednesday with light winds and mild temperatures. South of Asburton through into Southland the flow is more southwesterly and will likely produce cloudy areas with a few light showers at times but many dry spells too.

On Thursday expect sunny weather once again in the east of both islands north of North Canterbury with light winds. A mix of sunny areas and some cloud about western areas of the North Island with light southwesterlies dying away, there is the chance of a remaining shower in the morning about Taranaki. The West Coast of the South Island will be fairly cloudy with some drizzle in South Westland from evening, rain moves into Fiordland overnight.

Southland and Otago are likely to have some cloud in the morning, perhaps even a few showers however they will clear in the afternoon with sunny areas developing.