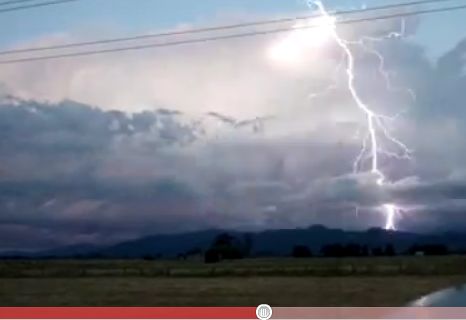 It’s been an eventful year weatherwise – and Mother Nature wise for that matter.

From droughts to floods, earthquakes to tsunamis, WeatherWatch.co.nz has brought you all the latest news and video from 2010.

In 2011 we are expanding our video section, to make it easier for you to view the latest uploads.

Here are just four of some of our favourite weather and non-weather related videos from across the year.

WeatherWatch.co.nz finally received confirmation a few months ago of a stunning photo sent in to us of a lightning strike that appeared to stretch up into blue sky.  Philip Brewer shot this video – and sent us a still from it.   When Philip Duncan showed the photo on Country99TV and mentioned that some thought it was a fake Mr Brewer immediately sent us the video to prove that it was, in fact, very real!

Back in July WeatherWatch.co.nz had exclusive access to Auckland International Airport for a photo and video shoot – and while directly under the flight path near the eastern end of the runway we captured this close up call with an Airbus A380!

The Chile tsunami was generated by a Magnitude 8.8 earthquake 115 km NNE of Concepcion, Chile.

Thank you to NOAA Center for Tsunami Research for providing this video, showing the huge effect it had on the Pacific Ocean as it rippled across it at almost the speed of sound.