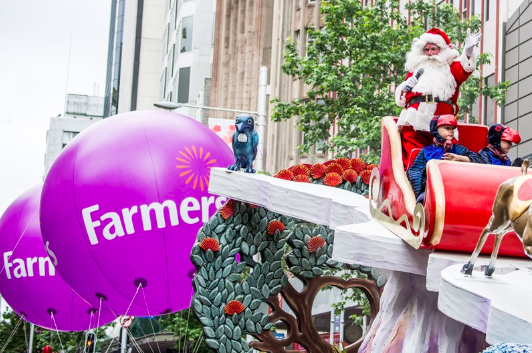 Organisers of New Zealandâ€™s largest Santa Parade in Auckland have secured private forecaster WeatherWatch.co.nz as their official parade forecaster for 2019 and beyond.

The Farmers Santa Parade has been going for 85 years and today it attracts hundreds of thousands of people, 3,500 participants and 280 creations of Christmas magic over a 2km route – so weather is critical.

â€œIn recent years the weather has caused some issues for organisers, participants and the general public so itâ€™s critical we have reliable and accurate weather information leading up to the parade and on the day itselfâ€ says event organiser Pam Glaser. â€œWeatherWatch has been supporting us for years on an informal basis, so to lock them in officially is a positive step forwards for us allâ€.

WeatherWatch head forecaster Philip Duncan says being part of the local community is a huge part of the brand. â€œWeâ€™re passionate about helping local events and ensuring they get the most accurate information. Aucklandâ€™s weather is famous for being four seasons in one day so while itâ€™s a challenge itâ€™s also a real honour to be helping out such a well known Santa parade and community eventâ€.

The Farmers Santa Parade starts at 1pm this Sunday November 24th. You can find more full information about it here: www.santaparade.co.nz

As for the weather forecast this Sunday – itâ€™s looking great at this early stage with a high of around 21 or 22 degrees, passing clouds and a southâ€™west breeze.