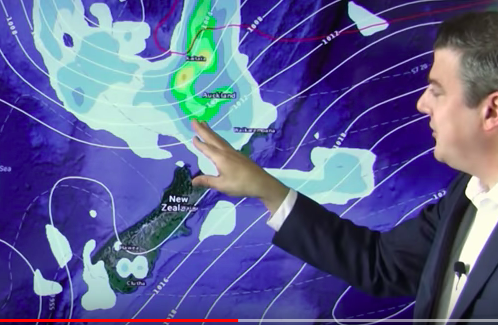 High pressure dominates much of the country today and Thursday. However, sinking air pressure to the north of New Zealand will see rain clouds forming around Northland and later this week Auckland too.

The weekend sees areas of rain in the upper North Island although the bulk may be out at sea; northern areas are likely to be clipped by it.

We still need another day to fine tune this forecast but at the moment the weekend is likely to see rain spreading in across the North Island and later the South Island. Conditions will also warm up for those that recently had a cool down, with north to north east winds by Sunday nationwide.

*Apologies if the audio is a little lower than usual.

Not only was the volume a bit low, but it appears the video is truncated at both ends. Prob up to a minute missing on each end, going by past videos.

Our apologies – definitely a significant technical issue today that wasn’t picked up when the video was uploaded. Will definitely sort by tomorrow!
Cheers
WW