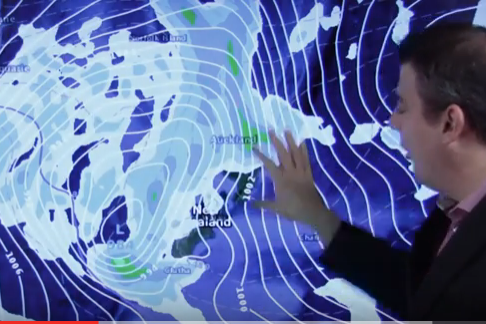 â€œItâ€™s a little bit messy, in fact little bit is an understatementâ€ says head forecaster Philip Duncan as he describes the incoming deep and large low which will engulf the country over Thursday and Friday and even Saturday to some degree.

Itâ€™s not a repeat of the system we had last week but it is a more widespread weather events with a mix of strong winds, heavy rain and snow. The low is so large it will spread sub-tropical northerly quarter winds and much colder Southern Ocean southerlies over the nation.

Tuesday and Wednesday see fairly average conditions around the country with nothing too dramatic – but a developing sub-tropical norâ€™wester forms on Wednesday.

By Thursday the big deep low from the Tasman Sea is coming in and strong maybe gale force winds along with heavy rain looks likely – wettest weather in the north and west of both islands.

By Saturday eastern areas get more wintry weather and blustery SE windsâ€¦but many northern and western areas should see the sun returning with calmer, drier weather returning to most of NZ by Sunday.