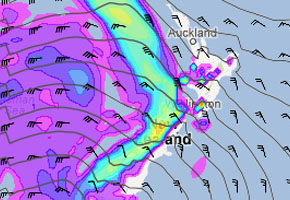 This weekend will produce heavy rain, strong winds and a risk of thunderstorms. The strong winds are likely as one of our readers Michelle Morrison put it to be everywhere essentially through most of this weekend, right from Southland all the way up through to Northland. The likely places to get the strongest winds gusting to gale force will be the likes of Inland Canterbury and Marlborough, about the Southern Alps and the lower North Island in particular about Cook Strait. All winds coming from the west or northwest.

Thunderstorms will likely develop about the West Coast of the South Island later this evening in Fiordland and developing in other areas further north overnight, and will continue through much of Saturday easing on Sunday morning. On Sunday evening another band of thunderstorms moves in. The west coast of the North Island could well see some thundery activity move in on Saturday evening and accompanies the heavy rain threat mentioned above.

There are hints of some thundery weather developing on Sunday afternoon or evening about Canterbury however if it did happen it would most likely be quite coastal and isolated meaning many may not see anything even if it does happen.