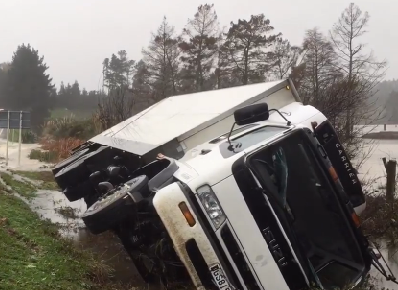 Floodwaters are threatening to cut off Katikati, in the Bay of Plenty.

The township is now bracing for high tide in an hour.

State Highway 2 has already been closed to the north and heavy rain is causing major flooding on roads south of the township.

Police said on its Facebook page the heavy rain had caused flooding in low-lying areas.

Delays are expected and alternative routes were being looked at.

A reporter in Katikati said the flood waters had washed a small truck off the road near Lindemann Rd, north of the township.

Resident Sue Larsen posted on Facebook there was major flooding and the highway was closed at the Uretara Bridge.

SH2 north of Katikati is CLOSED due to severe flooding. Please delay ur travel if possible or take an alt route ^LC pic.twitter.com/khAtRqVERR

The New Zealand Transport Agency advised traffic heading from Tauranga to take State Highway 29 over the Kaimai Ranges as flooding would close SH2 for some time.

In Coromandel, the seaside community of Tairua is cut off to the south, as State Highway 25 was now closed from the intersection of SH25A at Hikuai. No detours are available.

1414 lightning strikes in the past 60 minutes around the upper North Island: https://t.co/GrIZVvTp5y Happy Sleeping! pic.twitter.com/5z5ORJbuRv

Meanwhile, the state highway east of Kopu, near Thames, was now open after an earlier slip, with a stop-go sign in place.

Warnings were in place from the central North Island to Buller for southeast gales, with gusts up to 120km/h today.

More than 1400 lightning strikes lit up the skies between midnight and 1am as the severe storm gathered force.

Just after midnight, the MetService warned those east of Warkworth to expect torrential rain.

An earlier storm warning was extended as the lightning and thunder showed no sign of abating.

The Fire Service was kept busy with around a dozen callouts to help homeowners in Warkworth, Leigh and Matakana cope with flash flooding in properties and on roads.