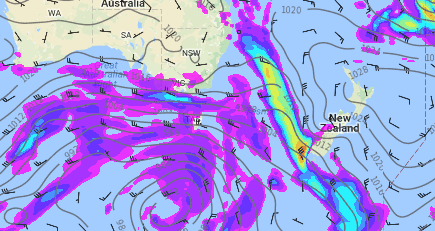 The temperatures across the country have dropped significantly since the blast of Antarctic air spread over the nation last weekend. WeatherWatch.co.nz said last week the cold air would likely linger for about 7 days before a westerly change swept through and flushed that polar air away.

High pressure has dominated a big chunk of the country this week – locking in the cold air.  Meanwhile a small low in the north has kept cold air, cloud and rain around northern New Zealand capping the temperatures there too.

But the westerlies are about to return – and generally they look set to cut off any southerlies trying to head north for a while.

The first front arrives this Friday in the South Island and Saturday in the North Island. It’s not very strong but is the start of the more westerly shift for the second half of August.

Just 48 hours later the next front arrives on the West Coast and to more places on Monday.

Then a high rolls in from the Tasman Sea around next Tuesday and Wednesday – but it will be quite northern focused and, just like we saw in June and Juy, this northern placement of the highs encourages the belt of westerlies to move over New Zealand.

At this stage there are no polar southerlies in the 10 day forecast.

– Rain and wind map for Saturday August 20th shows a high departing to our east and a cold front with windy westerlies returning / Weathermap.