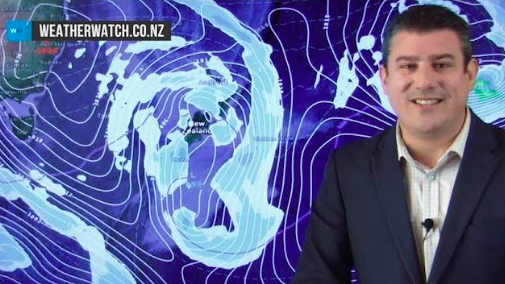 Yet another large low is coming in to New Zealand promising more rain into saturated areas and another burst of wind, warmth and then cold.

Tuesday, Wednesday and Thursday basically see higher pressure dominating around New Zealand, with a few coastal showers mostly in the east of the upper North Island.

By Friday the North Island is much warmer under sub-tropical norâ€™west winds which may rise to gale force around Cook Strait. These same winds may also rise to gale force inland along the South Islandâ€™s east coast as heavy rain sets into the West Coast.

By Saturday the centre of the low will be crossing the South Island bringing calmer weather there and the windiest, wettest weather looking likely to affect the North Island.

Sunday sees a cold, wet, southerly reach Southland and Otago while showers and sunny/dry spells increase in other areas – but the westerly to south west winds may be windy for some, calm for others…