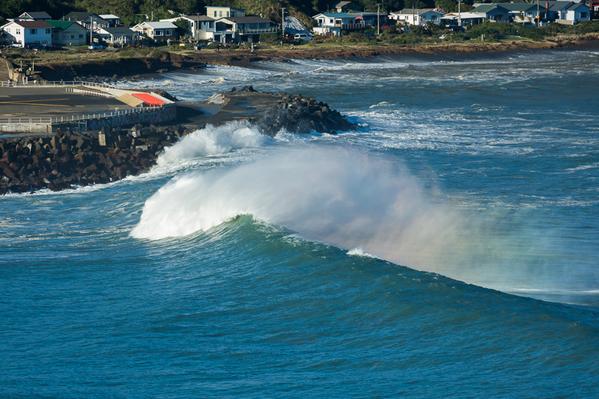 Giant waves which pounded houses, spat up boulders and trapped a vehicle on Wellington’s south coast could return today.

Roads around Lyall Bay – near the city’s international airport – Owhiro Bay and Island Bay had to be blocked off yesterday afternoon after fierce waves endangered motorists.

Emergency services were called after two people became trapped in a vehicle on Cape Palliser Rd just after 1pm, when waves damaged part of the road. Police said they managed to get themselves to safety.

Police were also called to the area after reports of cars in danger of being swept out to sea. Tow trucks were organised for the vehicles to be removed safely.

Miramar resident Julia Price had a near miss after pulling over in a seaside carpark on Lyall Parade to have a closer look at the swells.

“I was just sitting in my car after I pulled in there, just watching the waves. But then I could see a swell that looked much bigger and thought, ‘Oh, I better reverse my car,'” she told the Herald.

Seconds later, a huge wave crashed over and on to the road, where she had been parked seconds before. “It just came straight over. It was incredible.”

Ms Price – who works on the digital team at Positively Wellington Tourism – said they were the biggest swells she had seen since moving there last year.

“We’ve probably had this four or five times in 25 to 30 years. It’s not a stormy surf, it’s just clean-cut [and] dead calm. She’s one of the bigger ones, that’s for sure.”

The waves were coming over the road, Mr Weir said, and were throwing debris on to the west side of the parade by the Maranui Surf Club, as well as by the airport.

“It’s monstering the breakwater out there, running right over it.”

He said the waves had drawn a hardy crew of surfers, who were making the most of the conditions.

The waves shocked locals with the weather in Wellington otherwise fine, reaching a high of 16C.

Weather conditions today are again expected to bring big swells that could reach up to 6m in some areas, including Cape Palliser, later in the day.

A spokesman for the Wellington City Council said last night that road closures were expected to remain throughout the night as crews monitored the situation.

Southern cold snap on the way bodes well for skifields

Numbingly cold temperatures are forecast for much of the country early this week but Aucklanders may escape the cold snap.
Meteorologists are warning of plummeting temperatures tomorrow, particularly in Dunedin, Christchurch and Wellington, as a large storm in the Southern Ocean swirls away from the country.

Auckland should stay relatively mild, and sun may even be on the cards, WeatherWatch weather analyst Philip Duncan said.

The weekend’s blustery winds should die off by Wednesday and easterlies rolling in will bring breezy and cloudy conditions, he said.

“It certainly doesn’t feel like winter yet in Auckland. It’s not a really bad week,” he said.

“A lot of the storms that pass by us are huge at this time of the year … Dunedin, Christchurch, Wellington get it but there’s a whole lot of land between there and Auckland so it stays kind of mild.”

But the lower North Island and the South Island might be a different story, Mr Duncan said.

Biting winds would bring a seriously cold day to Wellington tomorrow with hail, sleet and snow possible, he said.

The city would have an actual high of 9C but it would feel more like 4C, he said.

Snow was also forecast for the hills of Dunedin and might reach the city streets but probably won’t settle.

Temperatures should pick up again by Wednesday and stay relatively high until another cold snap comes through on the weekend, Mr Duncan said.

“It’s not often that we have snow on our forecasts for Wellington city but Tuesday it is forecast in the region down to 400m.”

To me the only interest in the story was puzzlement – even some from locals – about how huge swells were happening on a beautiful winter’s day. it’s clear that ignorance about Wellington’s sheltering from SW flows is as widespread as it always was …

Wow, some magnificent sights Mother Nature (& Weatherwatch) have served up.

I think she got a little carried away in Wellington though.