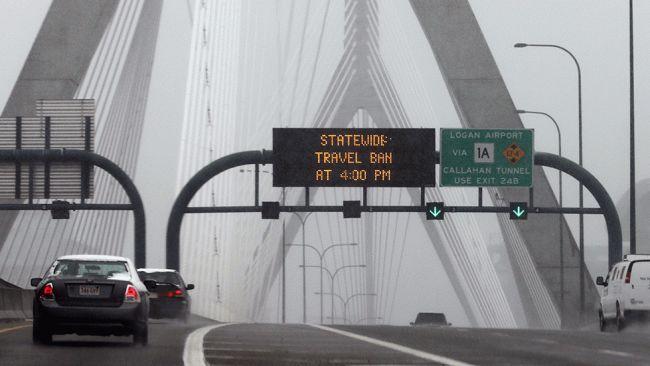 It’s already caused a 19-car pile-up in the state of Maine.  It has shut down major airports including Boston’s Logan International.  It has suspended passenger rail-service in New England.  It has caused the governor of the state of Massachusetts to sign an executive order to make it illegal to drive on the roads.

We’re talking about the Blizzard of 2013.  It’s likely to rival, if not surpass, the historic Blizzard of ’78.

As of 7:00pm local time (1:00pm NZDT), nearly 31 cm of snow had already fallen in Youngstown, New York.  Boston could still see up to a metre of fallen snow with drifts up to 1.5 metres high.  Parts of Connecticut and Rhode Island could also see accumulations close to 1 metre.  The rest of southern New England could see accumulations 30-60 cm.

All of this will be combined with high winds.  Winds that will not only whip the snow around, but will also help to bring down power lines and will likely lead to coastal flooding as it piles up the water against the shore line.

Southern New England is likely to be crippled for several days.

So what does all this mean for Kiwis?

For one, thing it means if you do overseas business with companies in the north-eastern US, expect delays.  It make take 3 to 4 days to get power back on and get travel back to normal.

That’s another impact that a Kiwi might feel.  If you have any travel plans, flights might resume as early as Sunday but air travel in that part of the US is likely to remain slow with frequent delays and schedule changes until Tuesday.

All images/ The Weather Channel