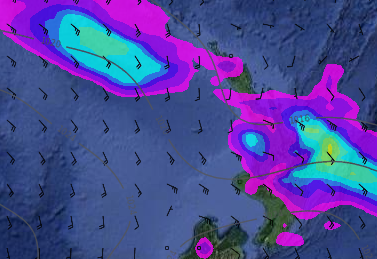 Patchy rain, with a mixture of light and heavy falls, is moving across the upper North Island this afternoon and expanding. Hawke’s Bay has had a few heavier downpours with up to 20mm falling in Napier so far today. But it’s Gisborne that should see heavier rain over the next 24 hours – in the past few hours alone over 20mm has fallen there. WeatherWatch.co.nz says a further 20 to 30mm of rain is possible in Gisborne/East Cape which will put a “dent” into the drought that has developed there over the past few months.

The band of rain is now stalling over the Gisborne/Upper North Island area and latest rain radar shows the bulk of the rain in the ranges around Rotorua, Bay of Plenty and Gisborne.

Overnight the heaviest rain is likely to form out at sea in the Bay of Plenty and it will brush Coromandel Peninsula, Great Barrier Island some eastern parts of Northland and Auckland.

The front will move a little further north tonight with the areas of rain expanding as it mixes with warmer air across the upper North Island. Downpours should extend into Northland overnight and Thursday morning with as much as 20mm possible in eastern areas up to about the Bay of Islands (although the BOI may only get about 15mm from this event).

Areas in the west aren’t going to be so affected by the front with little to no rain coming. For example Kaitaia, north west of Whangarei, may only get 5mm or so.

In the Auckland region things are getting dry and those in the east are most likely to get the rain. Eastern areas in the north of the region, like Whangaparaoa, may have heavier falls in the next 24 hours with up to 30mm possible. Meanwhile head west over to Helensville the totals may be less than 15mm.  With farms in between needing rain many will be hoping for some of the heavier falls to move their way – but please note the heaviest downpours will be isolated over land and more widespread out at sea to the east.

Waikato may get around 20mm of rain too, with some in the east perhaps getting a little higher and those further north or west receiving a little less.

The front clears away tomorrow. Some showers may return next week to the north.

HEAVY RAIN – COROMANDEL PENINSULA
A band of very heavy rain is expected to develop overnight/Thursday AM out over the western Bay of Plenty (marine). This will drift onto Coromandel Peninsula and Great Barrier Island. Our data shows that over 60mm of rain is possible at sea level with potential totals over 80mm in the ranges. All campers, trampers and others outdoors should be aware that heavy rain in the hills may cause small streams all around the Peninsula to rise rapidly. Slips are also possible.