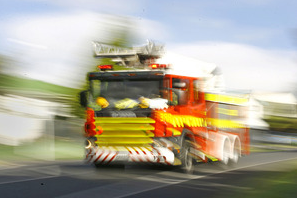 Updated 6:57pm — A scrub fire in Upper Hutt  forced homes to be evacuated, a firefighter to be hospitalised and State Highway 2 to be closed for a time.

The fire broke out on Mount Marua around 2pm, and there were 15 fire engines plus a helicopter battling to put it out.

The condition of the injured firefighter is unknown.

She says there was also traffic congestion on State Highway 2, where trucks were on the side of the road.