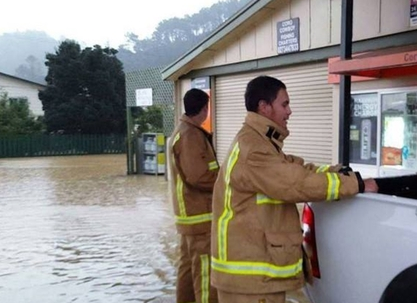 UPDATED: Floodwaters have receded and all roads are open in the Coromandal Peninsula after the region was hit by torrential rain yesterday.

This morning all the region’s roads are now passable according to the NZTA after flooding cut off main routes to the north yesterday.

Just one section of State Highway 25 at Hikuai is still causing concern with motorists being warned to take extra care of surface water.

Thames Valley Emergency manager Gary Talbot said teams would be out at first light to survey the damage but it appeared the worst was over.

He said yesterday’s flooding which hit the northern tip of the peninsula hard appeared to coincide with high tide.

Once the tide had turned and the heavy rain over the Pinnacles and ranges stopped the flooding didn’t take long to clear.

“The reports from rural fire brigades is once the tide started receding the flooding also began receding,” he said.

There were no reports of road closures this morning though crews would be inspecting damage from rockfall and cracks.

“We’re really dependent on daylight coming to give us a better idea of how the region has fared,” he said.

He said a number of people were trapped by floodwaters including around five people flooded out of the remote Waikawau Department of Conversation campsite.

“From reports we had four to five people got trapped in some floodwaters and were helped out by the DOC camp manager to a house for the night,” he said.

Contractors were this morning clearing a slip that had closed the main road linking Coromandel to Whitianga.

The NZTA tweeted a slip had blocked State Highway 25 between Coromandel and Te Rerenga.

The road was blocked in both directions but it was expected to be cleared early this morning.