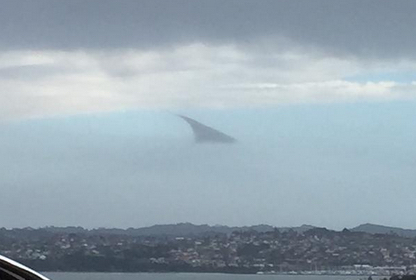 Some roads are affected by debris and surface water.

Good luck @Vectorltd – your crews will be busy after that blast of weather! https://t.co/xZHzwryKnC

@WeatherWatchNZ crazy cloud after the rain looking towards Massey. pic.twitter.com/gwcfHL9LTt

While pockets of damage are being reported right across Auckland it’s imporant to note that most properties don’t have damage.

Yesterday WeatherWatch.co.nz said there was a risk of a small tornado or localised wind damage as the active front passed through.  While no tornados have been confirmed the reports coming in to WeatherWatch.co.nz talk of winds swirling in all directions and “rain that was going upwards” according to a couple of tweets from Aucklanders.  Whether it was a squall or small tornado winds in the strongest gusts are estimated to have been about 110 to 130km/h.

“There are three phases to the weekend weather – first this narrow but very active front which is crossing northern New Zealand from west to east. The second feature will be more wind, rain and showers from the Tasman Sea as the low moves across the North Island and central New Zealand tonight. The third feature is already affecting Southland, in the form of an Antarctic southerly which spreads north tonight and on Sunday, clearing skies for many regions as the day goes on”.

Auckland City has experience the first phase – now the afternoon will see drizzly showers and dry spells increasing – before showers and blustery winds push in later today and this evening as the back end of the low moves in. The Southerly arrives in Auckland on Sunday.