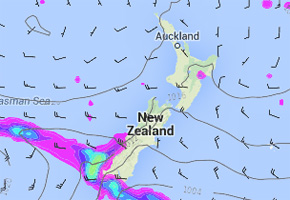 This coming week sees two main features, a front moving over the country on Monday and Tuesday then another later in the week. In between we have more settled weather although as always it isnâ€™t perfect everywhere.

On Monday expect a front to move northwards over the South Island during the day, rain for the West Coast eases to showers late afternoon / evening as westerlies give way to southerlies. Along the east coast a southerly change moves into Southland early morning then up into Marlborough by evening bringing rain, sunny areas before hand with some high cloud developing.

West to southwest winds lie over the North Island, sunny spells in the west with cloud thickening later in the day. Warm on the east coast with northwesterlies, Wellington sees sunny areas and increase cloud with strengthening northwesterly winds. Later in the evening / overnight rain moves onto the lower North Island
with southerlies.

Sunny spells increase from morning over the lower North Island on Tuesday, southerly winds ease. Showers clear the upper North Island in the morning then sunny areas increase, southerly winds. Showers may hang about Hawkes Bay and Gisborne till mid afternoon before clearing. Westerly winds ease over the South Island, sunny spells on the West Coast and mostly sunny on the east coast. Cloud about Southland gives the odd shower.

A mainly settled day over the country on Wednesday with light winds and afternoon sea breezes for many due to a weak high pressure system. Expect plenty of cloud about morning and night however especially along the east coasts of both islands.

Thursday sees things gearing up for another front with a west to northwesterly airflow freshening over the country, mostly sunny in the east with cloud increasing out west. In the evening southerlies push into Southland and
Otago with some rain which pushes further north overnight.

Showers / rain spreads northwards onto the upper South Island and North Island later in the day on Friday as a southerly change pushes through. Western parts of the North Island donâ€™t receive a heck of a lot of rain from this frontal system, precipitation will be more intense in the east.