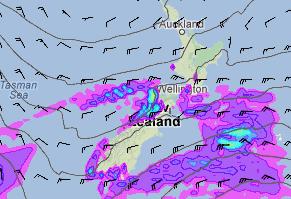 The weather tomorrow will be influenced by a westerly airflow. In the North Island conditions are expected to remain mostly dry however from midday the odd shower may appear in the west from Wellington through to Taranaki.

Mostly cloudy skies with some sunshine is on the cards for the rest of the North Island in the west. The Bay Of Plenty will experience longer sunny spells and in the east from Hawkes Bay through to Gisborne sunny conditions can be expected. The Wairarapa will likely see some cloud and the chance of a brief shower in the afternoon as westerlies freshen for a time.

In the South Island sunny conditions are expected out east although there may be a brief early morning shower about Canterbury any of which will clear. Northeasterly breezes will pick up a little in the afternoon from the Otago coastline right through to Marlborough.

The West Coast of the South Island and Southland will see showers finally clearing early afternoon with breezy west to southwest winds, the reprieve from the wet weather will only be short lasting on the West Coast as northwesterlies and rain builds there overnight.

Hi
Just got a phone call from friends at Ha Hei saying they’ve been blown out of the campsite there – trees down and tents lost. They’ve gone to a house for shelter.