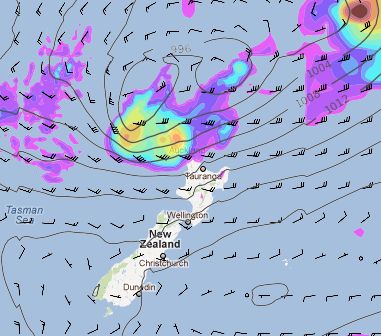 Here is the latest on next week’s potential storm.

The potential track and evolution of this low is still as clear as mud.  All the models take it to the east, well north of New Zealand.  But two models develop a secondary low that will act as our weather maker.  The one model that doesnt still tries to spread the energy of the first low across the North Island.

The models will eventually agree on a solution.

So for right now, rather than focusing on the details of the track, let’s take a look at what we call “sensible weather”.

In other words, who is going to get what?  And when?

So based on my new favourite model, the GFS, here’s what I think will happen.

Winds will start to pick up on Monday for everyone in Auckland and areas to the north.  A few showers may move into the far northern tip of Northland during the night.

Tuesday is also when the dangerous swells are expected to arrive.  Earlier today, we reported that   Brett Beamsley, Oceanographer at MetOcean Solutions (Weathermap.co.nz) believes that the forecast models are still offering moderate chances of significant swells and rips.

Four metre swells are possible from late Tuesday and lasting throughout Wednesday and Thursday over north east facing beaches across the upper north Mr Beamsley says.

On Wednesday, the rain will clear Northland and Auckland in the morning.  Waikato and Taranaki could see some clearing by evening.  But despite the rain ending, the gusty winds will continues.  Gusty winds are also expected for the eastern parts of the North Island where the rain is expected to continue.  The upper regions of the South Island should also get in on the rain and wind on Wednesday.

The gusty winds will hang on right into the weekend.  Rain chances will back off a bit on Thursday and Friday when just the far eastern regions of the North Island could get wet, as well as the upper South Island.

Precipitation could become more wide spread for Saturday and Easter Sunday.  The southern half of the South Island is about the only place in New Zealand that looks to be dry next weekend.

My confidence level in this is a bit higher as the models seem to be getting a little closer to agreeing on a solution.  A solution that makes sense.

But the low has developed now, pretty much as predicted.   Now it’s just a matter of watching it and seeing where it goes, how it develops and how the models respond.

WOW! Some people are so harsh…weather watch are just trying their best to give us some notice of whats to come! Doing a damn good job too, I prefer you guys 100% over Metservice…there forecasts always seem to follow yours and you are most of the time right. Lets remember that the weather changes fast and they are bascially just predicting the forecast on what they think will develop…not something that has already developed 🙂

“So based on my new favourite model, the GFS, here’s what I think will happen”
lol

hoping ya got that lol

you guys are just following the models. No forecasting to be seen here….move on.

Hi there, this is something every forecaster does – we’d rely on 60% of what the models were saying, but if you think we are simply repeating all they are predicting you are wrong.  Otherwise we’d be saying "Stormy" one day then "Sunny" the next, as this is what the models have been doing since last Sunday, chopping and changing wildly.  It’s up to the forecasters – not just us, but MetService and all the others too – to find the most likely outcome and middle ground.  This takes skill and isn’t just a matter of looking at a model and going with it.  Also, every storm is different – you need to be able to identify which model is wrong if they are picking two different outcomes – every trickier when you have several models with several different forecasts (as we’ve seen all this week – yet our prediction made early last week has barely shifted).  It’s our job to tie them all in using our knowledge of previous events, local topography and gut instinct as well, along with our weather systems around the country.  This is standard weather forecasting be it WeatherWatch.co.nz or The Weather Channel in the US etc.