Home > News > Tropical humidity drapes itself over nor...

At the coldest point of the night last night most of the Upper North Island was around 20 degrees with humidity between 90 and 100% says WeatherWatch.co.nz – and across Monday is no different.

Saturated sub-tropical air from behind ex-cyclone Winston remains “stuck” over the upper North Island and despite a colder change sweeping up the South Island – and by the end of Tuesday over two thirds over the country – this area of very humid air looks unlikely to budge for another couple of days – although may ease back just a little. 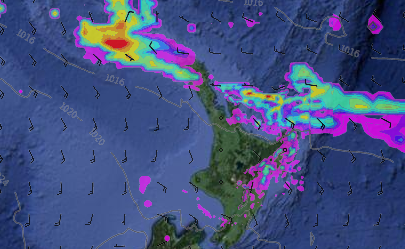 Rain map for 4am Tuesday (around the coldest point tomorrow) shows where the humid boundary is – where the rain is over Northland – fading out around Auckland and Coromandel. Later on Tuesday, or into Weds, some of this humidity may swing back a bit thanks to an easterly flow. Image / WEATHERMAP

“Normally a big powerful high is oval in shape and has quite a strong look to it – but this incoming high looks like it has a puncture in the north eastern corner” says head weather analyst Philip Duncan.  “The ‘puncture’ I refer to is where this energetic sub-tropical air lies, and despite the incoming high this area of humidity won’t budge much until the end of the week”.

Mr Duncan says the peak of the humidity for many places will be today – but that downpours and moderate to high humidity may remain for northern New Zealand over the coming couple of nights, and possibly longer in Northland.

As of 10am air temperatures in Waikato, Northland and Auckland were only in the low 20s but with humidity levels around 98 and 99% the ‘feels like’ temperature is more like 30 degrees, especially if you’re moving around.

In contrast, the lower South Island is much cooler with Dunedin on just 11 degrees and 57% humidity, while Invercargill further south has just 10 degrees. 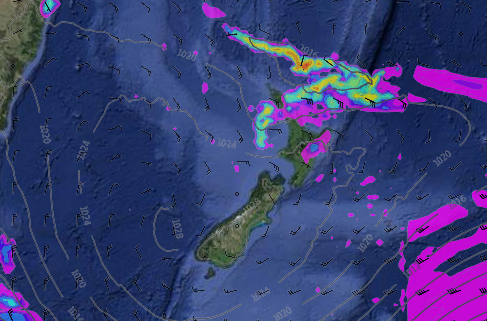