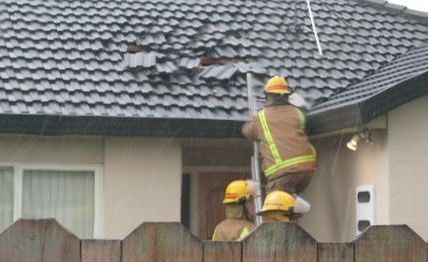 WeatherWatch.co.nz had reports of two minor tornadoes yesterday one from the Auckland suburb of Takanini and the other from the Far North.

While we can’t confirm if they were tornadoes or a squall we’ve estimated the winds were over 120km/h to cause this type of localised damage.

Takanini resident Hayden Oswin says at least four properties were damaged by the sudden gales.  “We had a tornado [Monday morning] in Longford Park.  [We] woke up with a hell of a bang when it hit the house”.

Mr Oswin says mostly roofing tiles had blown off houses and estimates it hit at around 2am.

Hi,
A line squall from Waipu in the south to the Bay Of Islands passed over the mid north area about 7.30 pm yesterday with extreme downdraughts causing at least 100 kph winds for a few minutes with hail following ,then dead calm twenty minutes later but only minor damage I know of.
Paul