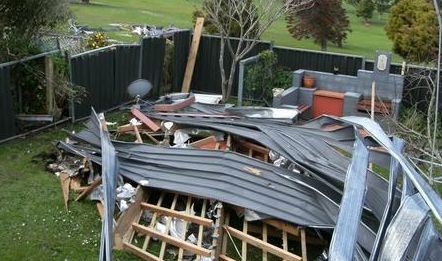 WeatherWatch.co.nz takes an indepth look at the weather and other environmental headlines that have dominated the year 2010.
Jan 21 – Drought zone declared in Northland, but ironically on that same day the North Island was pummelled by heavy showers and thunderstorms from a low in the Tasman.
Auckland city was hit by a number of torrential showers, some so heavy they turned gutters into small streams.
Jan 27 – For a few days a number of significant thunderstorms affected the South Waikato region, but on Jan 27 a major electrical storm hit. On the following day several severe thunderstorm warnings were issued across a number of regions across the North Island.
Feb 15 – Cat 3 Tropical Cyclone Rene hits TONGA
Feb 28 – One of the strongest earthquakes ever recorded – a massive 8.8 quake – hit Chilea creating a tsunami that affected all of the countries within and surrounding the Pacific Ocean.
A tsunami of 1 metre was detected on the Chatham Islands while a 40cm wave hit Gisborne. 30cm waves reached Mt Maunganui and parts of Northland. While fairly small the tidal surge was big enough to create some striking photos, taken by CH Davis which CNN International screened around the world via WeatherWatch.co.nz.
March 15 to 18 – Severe Tropical Cyclone Tomas reaches its closest point to Vanua Levu, Fiji.
The strongest winds were gusting up to 270km/h making it a Category 4 cyclone.
Meanwhile it was Double Trouble in the South West Pacific Ocean. Severe Tropical Cyclone Ului, also cat 4, churning in the Coral Sea. The two severe cyclones were fairly near each other – creating a rare sight on the satellite images.
April 27 – For the first time in months rain is being predicted from the top of the country to the bottom – the top, where it’s desperately needed, and the bottom where ‘enough is enough’.
May 15 – A violent thunderstorm moves across Auckland bringing fork lightning, torrential rain and funnel clouds.  At one stage 750 lightning strikes were detected by the lightning tracker at WeatherWatch.co.nz in just 60 minutes.
May 24 – Impressive rainfall figures following deluge.  Whakatane received 150mm within 24 hours, but incredibly 70mm of that fell in just two hours – and 46mm fell in only 1 hour.  Hastings also received torrential rain with 34mm in one hour.  North Otago had a months rainfall in one day causing serious flooding.
July 16 – BP Plugs oil leak in Gulf of Mexico
Sept 4 – A huge 7.1 quake hits Canterbury causing major damage to Christchurch and surrounding towns. A new fault line was created in the 60 second quake with hundreds of quakes following. Over 50 biuldings have been torn down in the CBD with 160,000 claims made to the EQC making it one of the most damaging natural disasters in the world.
Sept 17 – A storm the size of Australia hits New Zealand several days after WeatherWatch.co.nz exclusively called it. The storm caused millions of dollars damage across NZ and saw WeatherWatch.co.nz’s busiest week ever.
Storm Highlights:
* Up to 75,000 without power across NZ during storms duration.
* A house in Auckland is blown apart by a twister
* Tornados reported in Auckland and across Waikato
* Huge trees blown on to a moving car on SH1 just south of Auckland, closing northbound lanes
* Lightning strikes in Hutt Valley and Wairarapa, set fire to shed and trees causing power cuts
* Over 7000 lightning strikes detected around NZ over Friday and Saturday
* Numerous State Highways across NZ closed, including Auckland’s Nor Western motorway for a time.
* Roof removed on a house in New Plymouth
* Trees uprooted across Auckland and Waikato
* New Zealand Herald had delays of 6 to 9 hours getting the paper delivered on Saturday due to major power outage
* Residents trapped in a North Shore home after gales damaged their house on Friday night
* A car partly crushed by a huge pine tree in Grey Lynn
* Some Auckland roads closed by trees and fallen powerlines
* A car hit a tree in Auckland, occupant taken to Middlemore hospital with moderate injuries
* Half a million lambs killed by wintry blast in Southland.
* Brand new Stadium Southland suffered catastrophic damage when the roof collapsed under heavy snow.
* Most businesses in Invercargill close doors on Sunday due to severe weather
* Civil Defence warns Aucklanders to stay away from West Coast due to 8 metre swells
* Hurricane force winds, peaking at 154km/h, hit the Manukau Heads farming region west of Auckland causing damage.
* MetService issued 30 severe weather warnings for every region in the country
* Invercargill and Queenstown Airports both closed
* Many prop aircraft flights delayed or cancelled at Wellington airport
Oct 18 – Super Typhoon Megi heads towards the northern Philippines.
Oct/Nov – After a stormy Sept the next two months of Spring are incredibly dry with parts of Northland and Auckland receiving their hottest spring on record.
Dec 18 – Heavy rain and high humidity moves into northern New Zealand bringing relief to some farmers but causing sleepless nights for many people.
Dec 26 – Another big aftershock hits Christchurch.  Measuring 4.9 it causes damage to buildings and cuts phone and power to parts of the CBD.  It’s a tough time for businesses with this big shopping day seeing electronic transactions down 10% due to the quake.
Dec 28 – Winds reach 172km/h on Mt Kaukau in Wellington, with gusts reaching 125km/h in Wellington City, the Manukau Heads and Kaikoura, while gusts between 90 and 100km/h hit Westport and Napier.  Flooding affects Nelson and Havlock.