Tongariro has a quiet night 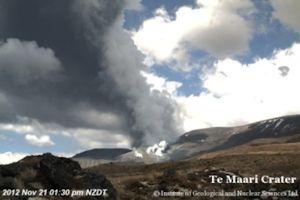 Tongariro has had little activity overnight.  GNS Science did not record any sign of eruption or any increase of volcanic activity. There is no indication at this stage that activity is to resume any time soon.

However, the Alert Level remains at Level 2 and the Aviation Colour Code remains at Orange.  Aviation Colour Codes are based on four colours and are intended for quick reference only in the international civil aviation community. Code Orange indicates that a volcanic eruption is underway but with little or no ash being produced.

The Volcanic Alert Level ranges from 0 to 5 and defines the current status at a volcano. Level 2 indicates that a minor eruption has occurred.

GNS Science is reassessing those levels this morning and will release a bulletin if and when they are changed.

The eruption occurred from the Upper Te Maari crater, in the same area that erupted on 6 August this year. Yesterday’s eruption happened at 1:25 pm and lasted for less than 5 minutes although local earthquake activity continued for about 15 minutes.

Yesterday’s eruption occurred without any measured precursory changes and this reinforces the unpredictable nature of volcanoes. We cannot say what will happen next at Tongariro but the scenario considered most likely, based on the August 2012 eruption and the description of late 1890s eruptions, is that we could expect another eruption of similar size at any time during the next few weeks. Eruptions are not expected to escalate in size.