Time’s almost up for settled weather 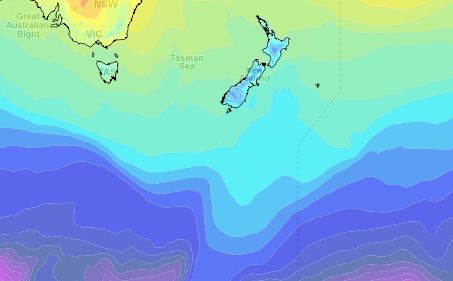 Loving the sunny, settled and fairly mild weather across New Zealand lately? If so, make the most of today and Friday as time is almost up before colder, wetter, weather returns.

WeatherWatch.co.nz forecasters are predicting a wintry change for the deep south over Saturday and Sunday heading in to the North Island on Sunday.

For a few hours the air will be coming from very near Antarctica so temperatures are expected to plummet in Southland and Otago on Sunday with WeatherWatch.co.nz predicting snow to few a hundred metres and sleet possibly to sea level around the Catlins.

Temperature-wise and eastern parts of the South Island have been amongst the warmest areas of New Zealand over the past 10 days – that will come to an end this weekend as winds shift more southerly.

But despite the air coming from near Antarctica it won’t be a repeat of the polar blast last month.  “Last months polar blast swiped all of New Zealand, this one is simply nicking the deep south” said weather analyst Richard Green.  “However even if conditions aren’t severe most of us will notice the definite colder change and stronger south west winds as far north as Northland”.

Precipitation amounts will be significantly less than the last cold change.

Hi, my daughter is sailing on the Spirit of Adventure 9-15 August, leaving from Auckland, sailing north…..do you think it will be a pleasant journey? Thank you.

Hi there – conditions for northern NZ during those dates look a bit unsettled but nothing too stormy in the picture just yet.  There could be a very large low in the Tasman Sea but large lows in the Tasman are often fairly docile.

Do you think it will rain in wanganui in saturday morning.? We are having an outdoors garage sale and the latest reports say showers developing on saturday but not what time of day they are exoected.

Hi there – we think you should be fine on Saturday.  Just a 10% chance of a shower on Saturday rising to 30% in the evening then 70% on Sunday.

It has been a fantastic week here in Auckland so can’t be too upset that things will change for a while, it makes you appreciate these sunny weeks all the more!
Have noticed the grass has started to grow this week, daffodils are all in full bloom here, magnolias here have bloomed already and now their leaves are coming out.. feels like spring almost!

We must be past the coldest part of the year now too? days should be warming up!
Oh the joy!! 🙂