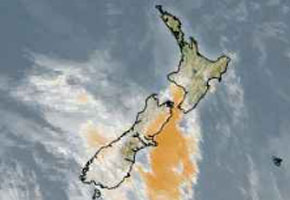 Timaru has hit 25 degrees this afternoon due to the influence of the northwesterly airflow over the country at present, that would have to be the highest temperatures I’ve seen so far this spring. The northwest is cranking up with some inland areas of the South Island reporting strong winds, Ashburton and Timaru currently have the windiest official readings with northwesterlies around 40 km/h gusting to 60 km/h.

There is plenty of cloud streaming across the country ahead of a front which is moving through Southland and soon Otago, expect showers with these fronts however the bulk of the wet weather will be on the West Coast.

Cloudy conditions have developed for most western regions of the North Island after sunny areas this morning, it is mostly dry although the odd light shower is about some western coastlines. The east coast is sunny with westerly breezes.

The highest rainfall for the past 24 hours has been about the West Coast of the South Island near the Glaciers and in the ranges behind Gisborne, 10 to 15mm falling in each area.