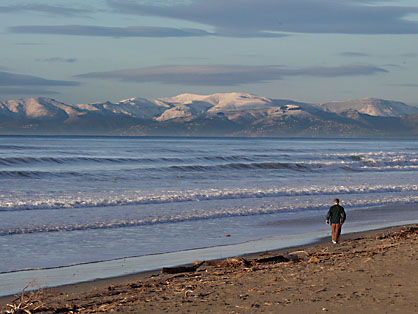 Thursday night could be a crunchy one for much of the nation as clear skies and mostly light winds are favouring heavy dews in the north and frosts elsewhere.

A southerly is still about eastern areas of the North Island which could prevent clear skies from appearing but sub zero lows across a few central and southern districts might be be heading our way.

Southern areas such as Blenheim, Queenstown and Wanaka saw a pretty good frost this morning with temperatures on the minus two and minus three degree mark.

“Tonight the frosts should be more widespread” says weather analyst Richard Green.”However starting in the south tomorrow night and for much of the country over the weekend skies look a little more unsettled for some places but not necessarily wet – just more cloud cover and a little breezy with a few showers or rainy spells here and there. Obviously that sort of activity stops frosts from forming”.

A nor’ east breeze saw a few cloudy areas over parts of the South Island today across the east and south and if that persists that could also stop Jack Frost from visiting.

During Thursday West Coasters took the second highest readings in the land with Greymouth and Westport on16 degrees whereas Kaitaia once again took the top temperature with 18 degrees. Gore and Te Anau were at the other end of the spectrum with a nippy 6 degrees.

WeatherWatch sees nor’ west winds picking up due to an approaching front and West Coasters should see the first of the showers push in tomorrow and the start of the weekend.
The rest of the Mainland sees a southerly change Saturday night and Sunday with showers moving northwards.
before then though temperatures are quite mild.
The North Island has a pretty good looking Friday and Saturday overall but the southerly just has to tail off first up from Gisborne to the Wairarapa.