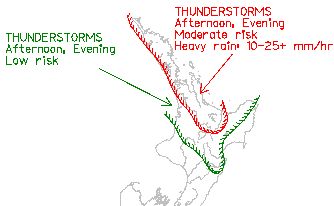 A cold and preceding trough should move onto the northern North Island on Friday afternoon and evening, reaching eastern Bay of Plenty at night. Both the front and trough are expected to bring rain to the northern half of the North Island,with possibly a few embedded thunderstorms says the government forecaster, MetService.

“These thunderstorms are most likely about Northland in the afternoon, and about Auckland, Coromandel Peninsula, Waikato, Bay of Plenty and Taupo in the late afternoon and evening, where there is a moderate risk of storms. A much lower risk of thunderstorms covers remaining central North Island areas and central Hawkes Bay during the afternoon and/or early evening as indicated on the chart”.

MetService says localised heavy rain will accompany any thunderstorms that do develop, and it is possible rainfall rates could reach 25mm/hr (or more) in a few places.

No thunderstorms are expected over the South Island on Friday afternoon or evening.

in Kerikeri tonight. Whole sky was lighting up!

are still going to get thunder in kerikeri

11:30pm edit – Apologies Didi, it appears a small area of thunderstorms has passed near/over Kerikeri – we hope you spotted them!

Pouring down in Thames now.

At The mount,, weather going around us so far but can see the rain at lightning offshore 5.42pm looks like we might get nailed around full tide!!

No thunder storms yet here in penrose but some of the heaviest constant rain i have ever seen in my life.. the water is coming up out of the drains, a work mate said it reminds him of sydney weather.
The road is flooded as is our driveway…. oh ok… scratch that just as im typing a bright flash and a huge clap of thunder.. woohoo! looks like it will be an interesting drive home.