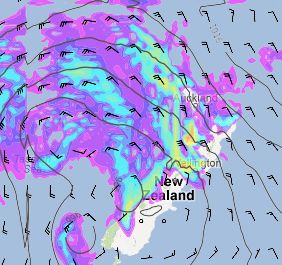 The large Tasmanian low continues to churn offshore this evening.  Showers are making their way onshore about Taranaki where a Heavy Rain Warning remains in place through tomorrow afternoon.  The warning also includes Waitomo, but most of the heavy falls are expected around Taranaki.  The majority of rain tonight should be in these areas.  However, showers are likely to dot much of the remainder of the southern half of the North Island.  The threat for small tornadoes about Taranaki still exists as well.

As the centre of the low crosses the deep south tomorrow, a more widespread rain is expected to cover the country.  An associated frontal boundary will help to focus the heavier falls.  The position of this front indicates that heavy rain is not only likely for Taranaki and Waitomo, but also for Nelson.  Rainfall amounts could be enough to cause flooding and slips.

Pockets of heavy rain are possible for the remainder of the lower half of the North Island and the western regions of the South Island.

The widespread rain is expected to continue into Tuesday as well.  Some heavy rain will also still be possible on Tuesday, mainly for the central sections of the North Island.