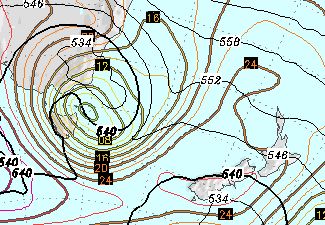 If you’re over the rain then this forecast won’t impress – at least three rain bearing lows, one with sub-tropical connections, are all in the 10 days forecast says WeatherWatch.co.nz.

The first of the next series of rain makers will arrive tomorrow bringing a period of rain to most regions, in particular the entire western coastline of New Zealand.

The rain will start on the West Coast later today and tonight then head into the North Island’s west coast across Tuesday.  It will clear New Zealand in the early hours of Wednesday.

Light winds and slightly above average temperatures will remain for Wednesday ahead of the next low scheduled to arrive at the end of the week.

WeatherWatch.co.nz says the next low has the potential to drag much colder air up across the country and may bring snow to ski fields in both islands during next weekend and early next week.

But the cold may be short lived.  WeatherWatch.co.nz says a third likely low will deepen east of Australia early next week.  The arrival time for this low reaching New Zealand remains unclear but WeatherWatch.co.nz expects another belt of rain, possibly heavy, later next week and should briefly replace the cold south west flow with a mild nor’west one.