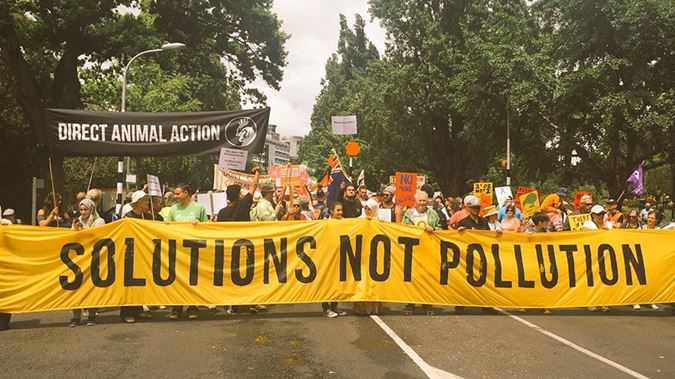 A dash of rain has failed to dampen the spirits of thousands of Aucklanders who have turned out to a demonstration urging the government to take firmer action on climate change.

The gathering at Albert Park in central Auckland is one of 35 events happening around the country and 2000 worldwide as Prime Minister John Key and Trade Minister Tim Groser get set to present New Zealand’s targets at climate change negotiations in Paris.

New Zealand march coordinator Kristin Gillies said it’s an issue that unites people from all backgrounds, and they hope to build a movement of ordinary Kiwis who can hold the government to account.

Gillies said current targets are woeful, and its about time there was more urgency in the government’s approach.

“The government’s already stated that it is taking to negotiations and we know that they are woefully inadequate, and so we really don’t expect to get a great outcome from these talks even if an agreement is reached globally.”

Queen Street comes to a standstill with thousands yelling for action on climate change @NewstalkZB pic.twitter.com/miXsqQcHbV

Delegates from close to 200 countries are gathering in Paris for what could prove one of the most important meetings in human history. Forty thousand people, many of them observers, journalists and activists, will descend on a huge 18ha site in Le Bourget, a transport hub to the northeast of the city centre hosting the two-week 2015 United Nations Climate Change Conference.

If Paris becomes the promised land of lasting action, the first tile in the long and winding road to get there was perhaps paved 5,834km away in New York City, 23 years ago.

At UN headquarters, nations adopted the grandfather of global climate policy: the UN Framework Convention on Climate Change, or UNFCCC.

The next big meeting in Germany produced the landmark Berlin Mandate and laid the groundwork for the world’s first greenhouse gas emissions reduction treaty, the Kyoto Protocol.

More promise came with summits at Marrakesh in 2001, and at Bali in 2007, but met an anti-climax at Copenhagen two years later.

It brought the world to the brink of triumph, but instead fizzled with a watery accord absent of any solid commitments to cut emissions.

In 2011, new seeds of hope were sown at Durban, South Africa, with governments signing up for a fresh and universal climate change agreement for the period beyond 2020.
The deadline: 2015.

Caritas Aotearoa is representing 165 member organisations worldwide, for the Catholic Agency for Justice, Peace and Development. Director Julianne Hickey will speak on on December 7th as part of an event with other non-government organisations.

Hickey wants to get a message across from the most vulnerable Oceania countries that any temperature rise must be limited to a maximum of 1.5 degrees.

“A lot of people are saying that isn’t possible, but we’re going to continue to advocate for that.”