This month in history…. 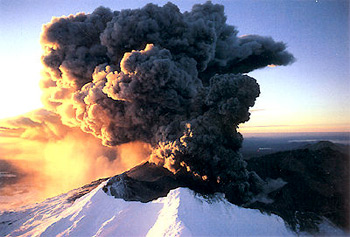 1 September 1888     Amuri earthquake
On 1 September 1888, at 4:12 AM, the northern South Island was shaken by a magnitude 7.3 earthquake that was felt from New Plymouth to Invercargill. The worst damage was in the Hope Valley and Hanmer region. During the quake the top 7.8 metres of the original stone spire of Christchurch Cathedral collapsed. The earthquake, centred near Amuri, was caused by movement along the Hope Fault in north Canterbury. Geologist Alexander McKay found farm fences there offset by several metres. This was one of the first documented examples of a large earthquake being caused by horizontal movement of the ground.
2 September 1950       Train derailed
On 2 September 1950, a goods train ran into a landslide on the line 8 kilometres north of Kaikoura. The engine and 16 wagons of the 40-wagon train were derailed. Drums of petrol on the train exploded and caught fire, and the local volunteer fire brigade put out the blaze by pumping water from a nearby creek. Flour, timber, potatoes, washing machines and Air Force equipment were strewn along the line. The train crew were unhurt.
10 September 1914   Disaster at White Island
White Island is New Zealand’s most active volcano. Early this century, attempts were made to mine the abundant beds of valuable sulphur on the island. In the early hours of 10 September 1914, a section of the volcanic cone collapsed, accompanied by a volcanic explosion. A large flow of hot mud, rocks, and volcanic gases swept down through the mining camp where ten miners were staying. Search parties who later reached the island found no trace of the men or the camp buildings.
23 September 1995     Ruapehu eruption
On 18 and 20 September 1995, after many years of little activity, small eruptions occurred in Crater Lake on the summit of Mt Ruapehu. The eruptions produced mudflows, but were not considered serious enough to shut down Ruapehu’s busy skifields. Thus, around 5 pm on 23 September, hundreds of skiers were on the mountain to witness a spectacular eruption from the Crater Lake at the mountain summit. Lahars—mixtures of water and volcanic debris—surged down three valleys. One mudflow narrowly missed a T-bar ski lift. Blocks of rocks were blown up to 1.5 kilometres from the crater, and steam and some volcanic ash rose 12 kilometres into the sky.

Floods in Otago ..Last week of September 1878
At the end of September 1878, warm rain fell on the extensive snow cover left by a severe winter, causing record floods in the South Island. Floods inundated communities along the Clutha River and its tributaries, and dozens of bridges along the river were destroyed, isolating many areas. A harbour at the mouth of the Clutha, Port Molyneux, was wiped out when the river carved a new channel. The Waitaki River had its largest flood. Lake Tekapo rose over 2 metres in two hours on the evening of 27 September. Lake Pukaki rose 4.5 metres, of which over 2 metres were in three hours.