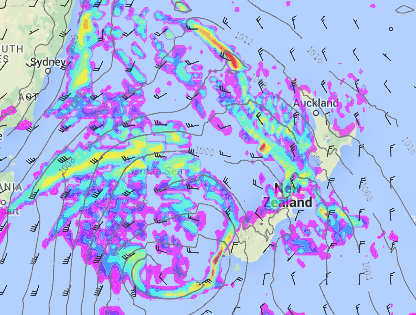 The overall weather situation looks pretty dramatic from above the country – with that large, slow moving low pressure system to our southwest still dominating proceedings for the near future.

A front will move onto the west of the North Island this morning from the Tasman Sea, pushed from behind by that big low – which will change the prevailing winds in the afternoon.

Rain and potentially heavy showers are likely on the western side of the North Island, from Auckland all the way down to Kapiti (even the chance of a thunderstorm in parts) while the lower third of the island is in for some persistent steady rain – especially early on in the day.
Taranaki itself looks likely to get a pretty heavy dumping in the afternoon, as well as other parts of the Central North Island.

Wind wise, North to Northwesterly winds will be strong through the Cook Strait area – with winds gusting to gale at times, before easing in the late afternoon or evening.
Taranaki sees gusty northerly winds also, then easing mid to late afternoon as winds change west to southwest.

Rain is likely to turn to snow on the Southern Alps and down to the ranges on the West Coast of the South Island as the cold change comes through with southerly winds associated with the low to our southwest.