Home > News > The fine line between heavy rain and dri...

The fine line between heavy rain and drizzle/dry this weekend 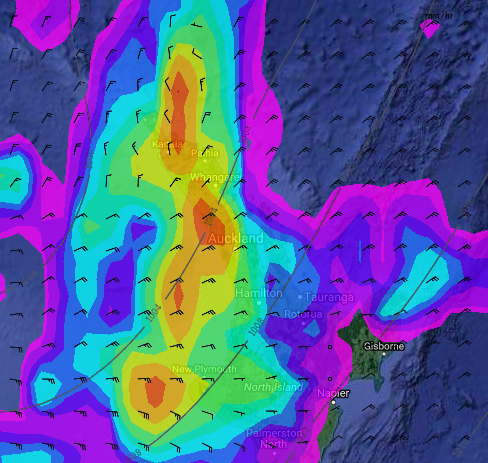 UPDATED — “Why is the chance of rain shifting around this weekend?” is a question we’ve been asked a bit this week The answer is this: The low is quite weak, the rain bands are patchy and the heaviest falls are in a narrow area meaning a slight shift west or east could make the difference between heavy prolonged rain or just patchy stuff with long dry spells.

Generally speaking there is a band of sub-tropical rain sliding down over the North Island this weekend – with falls later spreading into the South Island. On Saturday rain could be heavy at times for some North Island regions in the north or west – however the bulk of the rain looks to be out over the Tasman Sea.

There are plenty of dry spells mixed in with the patchy rain.

While the low is weak it is tapping into moisture rich sub-tropical air and this can lead to some very heavy downpours which could even cause isolated flooding.

This narrow but heavy at times band of rain will take Saturday, Sunday and Monday to drift from Northland/Auckland to Waikato and then to Bay of Plenty. It may then linger for another two days around the North Island.

The low that will be in the Tasman Sea will be dropping south towards the South Island but it’s a weak system – so as rain clouds move into various regions of New Zealand (including the lower half of the North Island) the mountains and ranges will affect the rain clouds, bringing a combination of light patchy drizzle for some and heavier rain for others.

The rain maps at WeatherWatch.co.nz are the best way for you to visualise this slow moving and somewhat messy forecast – we suggest you take a look at them and see some of these narrow but heavy areas of rain. Remember, the areas with purple/pink shading are mostly drizzle/low amounts of rain/dry spells.