The east has it, warmest in Gisborne 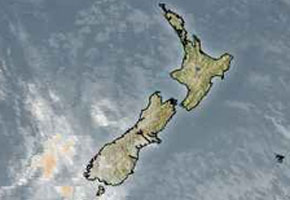 The east coast of the North Island has it again with the warmest temperatures around New Zealand due to a prevailing westerly airflow over the country, Gisborne is currently on 19.5 degrees. In fact the east coast of the South Island wasn’t doing too badly either this morning, Christchurch got up to 18.2 degrees at 10am before a northeasterly breeze kicked in. Blenheim is still doing the South Island proud with 18.5 at the present point in time.

It is not really a news worthy day in regards to extreme weather, western areas of both islands are a little cloudy and there is also still one or two showers about. Invercargill is the coldest place on 11 degrees in the land of the black singlet.

Winds aren’t too rough although in the west of the North Island and about western Bay Of Plenty westerly winds are a bit breezy between 25 to 45 km/h so might feel a little chilly at times relatively speaking when those gusts kick up.