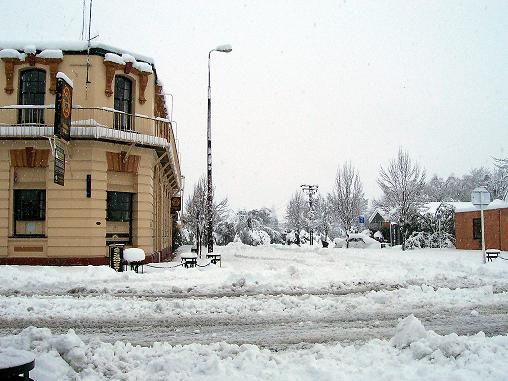 It was on this day six years ago and it appeared out of nowhere. All forecasters were caught on the hop as a serious snowstorm hit much of Canterbury.

It was an event like no other for some and the following information, courtesy of  J Hendrikx, gives great detail of the storm and compares it to earlier blizzards in the region

The large snow storm of 12 June 2006 delivered record snow depths to some parts of Canterbury and produced significant snow falls elsewhere, with considerable damage and disruption to electricity distribution, communication and transport systems in the greater Canterbury region.

Insurers have estimated that insurance claims in the South Island from the snow storm exceeded $35 million. Shortly following the storm, point measurements from the manual rain gauge network and other sources of data were collected to determine snow depths across the Canterbury region and they were compared to published information on previous snow storms in Canterbury.

In areas north of the Rakaia River snow depths from the June 12 storm had been equalled in previous storms. Snow depths in inland areas north of the Rakaia River were similar to the 1973 storm. However, the 2006 storm produced pockets of significantly deeper snow west of Darfield and towards the foothills, conditions more similar to the 1945 storm. In the coastal plains areas (north of the Rakaia) the snow was much deeper than the 1992, 1973 or 1967 snow storms, except in and close to Christchurch, where the 1992 snow storm was much more severe.

Snow depths were extreme in areas south of the Rakaia River. In the mid and south Canterbury plains and foothills the 2006 storm produced greater snow depths than the 1973 and 1967 snow storms. Snow depths throughout this area were similar to the 1945 snow storm and in some areas much deeper. Ashburton had its greatest maximum snow depth on record: it has been estimated that the 2006 snow storm represented a 1-in-150 year event in Ashburton.

Inland areas around Fairlie and Burkes Pass had snow depths similar to the 1973 storm, but areas further west in the Mackenzie Basin had significantly less snow than in most previous notable snow storms—only 50 cm were recorded at the Hermitage in 2006, as opposed to over 100 cm in 2002, 1973 and 1967.

Image of the Crown Hotel, Canterbury

Interesting story, but what were the snow depths?? You only mention figures for the Hermitage at the end!