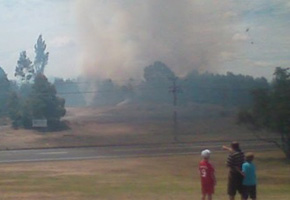 A scrub fire which has broken out in Taupo is endangering buildings.

The blaze was endangering buildings near the park, thought to be Spa Thermal Park, and a water tanker was on its way to assist the Taupo Fire Service.

Mr Smith said they received a call about the fire at 2.23pm.

Daily Post reporter Laurilee McMichael, who is at the scene, said there were five fire appliances and a helicopter with a monsoon bucket, using water from the Waikato River.

It appeared the fire was behind the Taupo mobile shop stall site. A lot of smoke and flames could be seen.

Emergency services had closed the road at the intersection of AC Baths Ave and Country Ave.

A group of five teenagers who had been swimming at the AC Baths crossed the road to where the fire was to take a closer look.

They described it as being as big as two rugby fields, if not bigger.

They could hear the fire crackling in the trees.

“As the pine needles fell to the ground, they would start little fires on the ground,” one of the teenagers said.

The teenagers told The Daily Post they were running around trying to stomp out the fires.

But the flames would spread quickly from one tree to the next.

The teenagers were later told to leave the area by emergency services staff.

McMichael said there was a large crowd of onlookers gathering at the scene. There were no houses in the immediate area of the fire but a camp ground is situated several hundred metres away. The camp has so far not been evacuated.

“The police are keeping a really close eye on everything.”