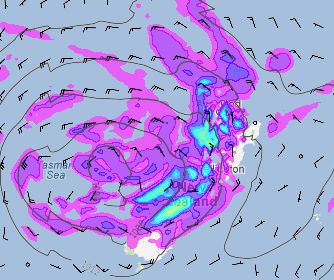 Our next weather maker, another Tasman low, will be blanketing much of the country with precipitation by tomorrow evening.

A few thunderstorms are also possible with this system.

The northern tip of Northland could see some showers tonight and tomorrow morning, but the bulk of the precipitation isn’t likely to start showing up until midday tomorrow .

The first rounds of precipitation will likely fall on Nelson and Taranaki during the late morning or early afternoon.  By tomorrow evening, most of the country will have at least a chance for precipitation.  The best chance will be along the far western sections of both islands.

Late tomorrow night, heavy rainfall is possible from Auckland south to Taranaki.  Some thundery falls are possible along the western sections of the North Island tomorrow evening into late tomorrow night.  The thunderstorms aren’t expected to be as brilliant or loud as the stuff last night and early this morning.  However, they could produce some brief heavy rain.

Pockets of heavy rain will also be possible on Monday and Tuesday.  Western Bay of Plenty, East Cape/Northern Gisborne, Taranaki and Nelson could all see heavy rain with the highest risk existing about Taranaki.

Heavy rain is also possible for the eastern ranges of Marlborough and Canterbury on Tuesday.  Although, at this time, the confidence at that forecast is pretty low.  We will have to wait and see how the low develops and changes as it moves across the country.