Home > News > Surf’s up for orcas as temperature... 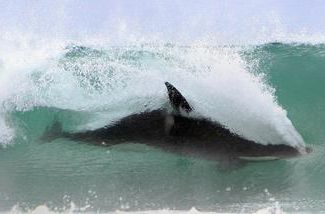 Surfers at a Northland beach had to compete for waves this week with a pod of orcas.

And if the temperatures keep going up like they did across the weekend, even more people could be scrambling for the water.

Northern Advocate photographer Michael Cunningham was one of those in the water at Sandy Bay, 40 minutes north of Whangarei, on Friday when the orcas appeared. 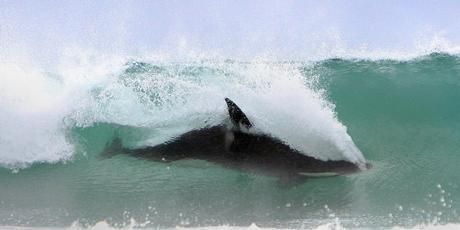 He headed to shore to get his camera before rejoining the orcas.

A visiting orca makes the most of the good waves at Sandy Bay, and was joined by surfers and even a whale calf. Photo / Michael Cunningham

Other surfers stayed at sea unfazed by the orcas.

“They knew what they were doing and pulled out before getting into trouble. They looked like they’d done it before.”

Northland’s marine mammal expert Ingrid Visser said surfers were safe around orcas as the mammals were there for the same thing – to surf and have a good time.

Orcas were called killer whales because they killed whales, not people.

The New Zealand Herald has video on their homepage at the moment of the Orcas – check it out!