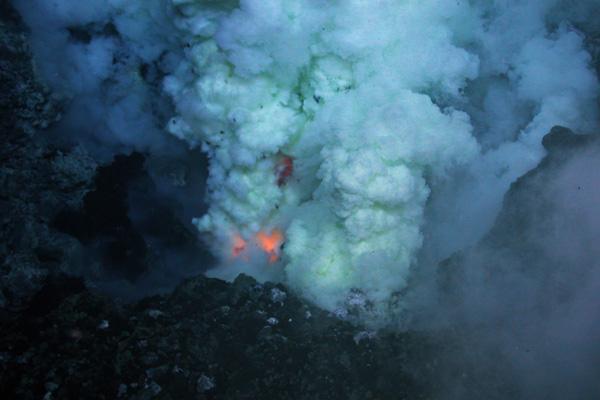 There appears to be plenty of activity taking place north of the nation however on this occasion it’s not  above ground.

A “supervolcano” forming deep below the Earth’s crust north of New Zealand, will have the power to destroy the world, but scientists are urging people not to worry – it could be 200 million years away.

University of Utah seismologist Michael Thorne has been studying seismic waves beating through the Earth’s crust, and says the ingredients are there for a “cataclysmic” eruption.

“What we may be detecting is the start of one of these large eruptive events that – if it ever happens – could cause very massive destruction on Earth.”

But Thorne cautioned people not to cancel their cruises just yet.

“This is the type of mechanism that may generate massive plume eruptions, but on the timescale of 100 million to 200 million years from now.”

The study has found that deep beneath the Pacific Ocean, two or more continent-sized piles of rock were colliding as they moved at the bottom of Earth’s thick mantle and atop the thicker core.

Published this week in international science journal Earth and Planetary Science, the study has found a Florida-sized zone of partly-molten rock is forming which had the potential to end in two ways.

It could end in a “hotspot plume supervolcano eruption”, similar to one two million years ago in Wyoming, which covered North America in ash.

Otherwise, the likely alternative was a “gargantuan flood basalt eruption”, which created large areas of igneous rock, like the Pacific Northwest’s Columbia River basalts 17 million to 15 million years ago.

“These very large, massive eruptions may be tied to some extinction events.”

Thorne said high resolution seismic imaging showed an ongoing collision between the piles of rock was merging in a “spongy blob of partly molten rock” underneath the volcanically active Samoan hotspot.

Seismic imaging uses earthquake waves to make images of Earth’s interior similar to the way X-rays make CT scan pictures of the inside of the human body.

The study has pieced together the largest set of data ever used to map the lower mantle in the Pacific region by using 4,221 seismograms from hundreds of seismometers around the world that detected 51 deep earthquakes originating more than 60 miles under the surface.