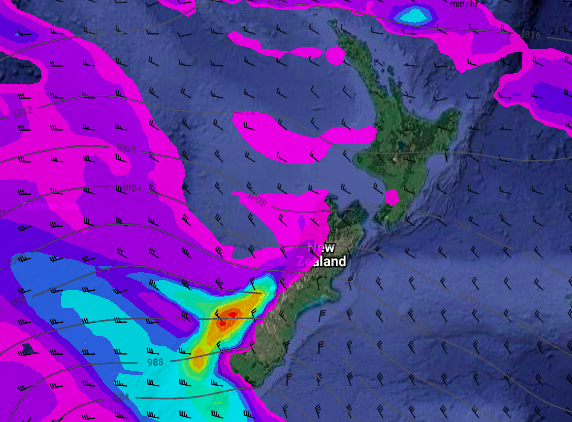 The weather won’t be too bad for many North Island areas today with very sunny and mild weather in the east but cloudier with showers increasing later in the west.

In the South Island another cold front is moving up the West Coast with heavy falls. Mostly sunny and milder in the east too but a cooler sou’west change later may bring a few showers.

NORTH ISLAND:
A few showers, mainly along the western coastline. Dry, mainly sunny and mild in the east. Nor’west winds becoming strong in Wellington and Wairarapa later.
Highs: 16 to 19

SOUTH ISLAND
Heavy rain on the West Coast. Isolated flooding possible. Strong to gale nor’west winds (may be north to north east for a time in some areas). Winds strongest in usual exposed areas and through the Southern Alps, especially the eastern side. Mainly dry in the east with sunny spells. A cooler west to south west change later on.
Highs: 9 to 18