Summer weather *returns to New Zealand (*yes, there is a disclaimer) 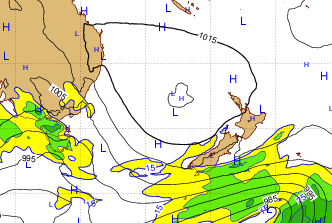 Summer weather is returning for many (but not all) parts of New Zealand. It’s been a messy summer week of weather with more headlines about storms, snow and frosts than there were about heat, sun and dry. It’s been windy, it’s been cool – and many WeatherWatch.co.nz readers are wanting to know when more traditional summer weather will return.

“High pressure is returning to many parts of the country this week and that brings with it lighter winds, sunnier skies and hotter afternoons” says head weather forecaster Philip Duncan. “Eastern and northern parts of both islands will be most exposed to the more summer-like weather with plenty of dry days ahead and highs climbing into the mid to late 20s even low to mid 30s for some in the east”.

Mr Duncan says hottest regions in the next 10 days appear to be Canterbury, Hawke’s Bay, Gisborne and parts of Northland and Bay of Plenty. Waikato, especially eastern and more inland areas, will also heat up into the mid to late 20s over the next 10 days under mainly or completely dry skies.

“With so much more high pressure dominating New Zealand over the next week or two many, especially in the upper and eastern North Island, will notice the calmer, drier, change”.

However it’s not smooth sailing for all regions. While a warmer, drier, spell of weather is returning to Wellington don’t expect the wind to go away too. “WeatherWatch.co.nz is still forecasting a more ‘spring-like’ weather pattern for the lower North Island and entire South Island. This means windier days will still be in the mix and further south the West Coast will still be seeing more showers and cooler winds from time to time. This will also brush past Southland and coastal Otago with changeable weather”.

WeatherWatch.co.nz says despite the recent rain, a ‘Big Dry’ is forming in a number of northern and eastern regions and by February many farmers, growers and gardeners will be wanting another burst of rain with their areas already drier than they should be for this time of the year.