Sub-tropical low – will it rain this time? 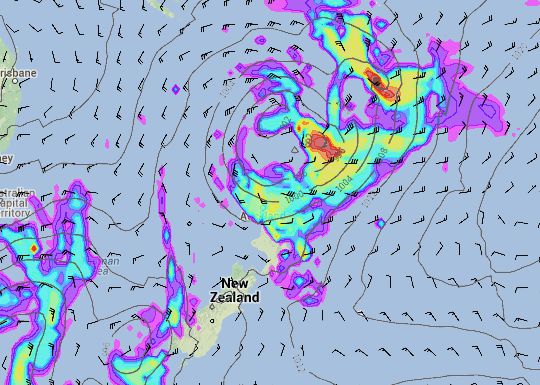 Another sub-tropical low is incoming and if you weren’t paying too much attention you’d swear you were looking at last weekend’s weather map.

An almost identical low is today dropping south towards the upper North Island as it starts to deepen.

Yet again WeatherWatch.co.nz believes the wind flow will be the decider as to where the heavy rain will fall. “When the wind flow from these lows is east to south east over the upper North Island that is like a reverse version of the Canterbury nor’weser for these regions” says head weather analyst Philip Duncan.  “Heavy rain may be swirling just offshore around the centre of the low, but the East Cape, Gisborne, Kaimai and Coromandel Ranges all do what the Southern Alps do – absorb most of the rain, leaving cloudy and fairly dry weather on the other side, in this case for places like Hamilton and maybe Auckland again”.

However Mr Duncan says this low will be deepening as it passed by the upper North Island – the low last week peaked around northern New Zealand then slowly fizzled out.   However the wind flow looks almost identical.

“This weekend the rain is even closer to Bay of Plenty and Auckland, but again we run the risk of winds tilting the wrong way for rain to set in here”.

Northern New Zealand is already starting to show signs of a very dry end to winter and many farmers are wanting a decent day of rain before spring officially arrives next month.

Heavy rain is possible this weekend in Northland, Coromandel and East Cape.  Should the rain arrive before the winds have started to turn more south east then we may see heavy rain for a time in western Bay of Plenty and possibly parts of Auckland, mainly north of Albany.

At this stage WeatherWatch.co.nz believes the bulk of the severe weather will remain just offshore, but will be close enough to warrant regular monitoring by us on Saturday.

Severe gales may also remain out at sea this time – but blustery easterlies may again affect eastern Waikato.

By Late Sunday the low will be east of Gisborne pulling in a windy and showery west to south west flow over the upper North Island.

It will definitely blow and be overcast quite a lot all next week too and be a shock after this weeks conditions.