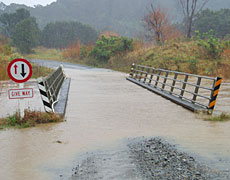 A developing low north of New Zealand looks set to bring a period of heavy rain and strong winds to northern facing regions of the North Island over the next few days with flooding a possibility.

The low is this morning showing up on the latest weather maps and will continue to slowly deepen over the next day or two.   North east winds, which buffeted northern New Zealand at the start of the week, will return later today in Northland and spread into Auckland tomorrow.

Easterlies are near gale force at Cape Reinga this morning but significantly lighter everywhere else.

Due to the position and track of the low regions that face north or north east will be most exposed in the North Island.

Head weather analyst Philip Duncan says while the low isn’t aggressive it is slow moving and that may cause problems.  “The low is tapping in to moist air in the sub-tropics and the rain bands are likely to move directly into the Bay of Plenty region.  With heavy rain over a prolonged period that increases the chances of surface, and more serious, flooding”.

Mr Duncan says slips may also be a problem in slip-prone areas of Northland, Coromandel, Bay of Plenty and East Cape and advises motorists to be aware of the conditions before heading out on Friday, Saturday or Sunday.

MetService has “high confidence” of prolonged heavy rain around Bay of Plenty starting Friday night and lasting through Saturday and moderate confidence of heavy rain across Northland, north Auckland and Gisborne.

A lingering front in the eastern Tasman Sea may also link up to the low bringing heavy rain to the Nelson region, however it’s unlikely to cause any problems at this stage.

WeatherWatch.co.nz says the low marks the beginning of another unsettled week of early spring weather.   Next week will see more westerlies across the country bringing warmer, drier, weather to the east and cooler, cloudier, weather to the west.